Friday's travel section of the New York Times named Oakland, California as one of the 45 places to visit in 2012. Northern Californians have long known that Oakland is San Francisco's fog-free counterpart across the Bay, where young people have been moving in droves to open restaurants and bars, art galleries, buy homes and dubbing it the "Brooklyn of the West."

The New York Times wrote, "The historic Fox Theater reopened in 2009 and quickly cemented its status as one of the Bay Area's top music venues, drawing acts like Wilco and the Decemberists. Meanwhile, the city's ever more sophisticated restaurants are now being joined by upscale cocktail bars, turning once-gritty Oakland into an increasingly appealing place to be after dark."


Classical music fans have long known that some of the most innovative programming occurs under conductor Michael Morgan with his Oakland/East Bay Symphony Orchestra. His upcoming Carmina Burana will feature barihunk Zachary Gordin and it will be paired with Glazunov's rarely performed Saxophone Concerto from 1934. There is one performance on Friday, January 27th and tickets are available HERE. The performance is at the historic Paramount Theater, which is walking distance away from the recently restored Fox Theater (pictured above).

If you're looking for the really "hot" show in town, then head over to West Oakland's "The Crucible," where they have pioneered the concept of "fire operas." And we're literally talking about opera with real fire. A performance of a fire opera at The Crucible will make Brunnhilde's "Immolation Scene" look like a burning match. The Crucible is actually an industrial training center where people learn a variety of fire skills. Their current offering, "Machine," will feature molten metal pours, fire performers, glass blowers and blacksmiths.

MACHINE was written, conceived and directed by innovative director Mark Streshinsky. The music is by Clark Suprynowicz, who is known for his jazz and rock infused compositions of operatic and symphonic works.

The plot is based on a short story by science fiction author Derek J. Goodman, MACHINE is set in a fiery industrial universe in which workers have sold themselves into a lifetime of servitude. When one worker regains his power of self-determination, the story ignites into an explosive brew of escape plots, alliances and unlikely love interests 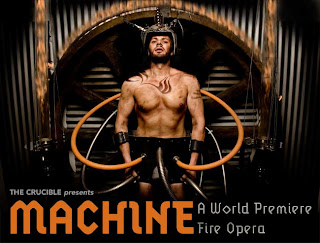