Two of our very favorite (really, really) low voices will be making their respective role debuts as Osmin in Mozart's Die Entführung aus dem Serail (The Abduction from the Seraglio).

The coveted Mozart bass role will be sung by Aaron Sørensen with the Houston Symphony Orchestra on January 23 and 25 under the baton of Andrés Orozco-Estrada. The cast also includes Lauren Snouffer as Konstanze, Paul Appleby as Belmonte, Rafael Moras as Pedrillo and Abigail Dueppen and Blonde. It will be performed in concert performance. Tickets are available online.


A month later Kevin Thompson will take on the role with West Bay Opera under the baton of José Luis Moscovich and directed by barihunk Eugene Brancoveanu. Performance will run from February 13-22.  The cast also includes Nikki Einfeld as Kostanze, Michael Desnoyers as Belmonte, Tapan Bhat at Pedrillo adn Chelsea Hollow as Blonde. Tickets are available online.

Osmin, who the Pasha's comically sinister overseer of the harem, is a send-up of earlier stereotypes of Turkish despotism. Osmin's music includes some of the composer's most spectacular and vocally challenging music. His Act 3 aria "O, wie will ich triumphieren" includes characteristic 18th century coloratura passage work, and twice goes down to a low D (D2), one of the lowest notes demanded of any voice in opera. In the aria, Osmin sings of the delight that he will have when Pedrillo, Belmonte, Blondchen, and Konstanze are all hanged. The first Osmin was Ludwig Fischer, a bass noted for his wide range and skill in leaping over large intervals with ease.

Osmin's other arias are "Solche hergelaufne Laffen" from Act 1, where he explains in graphic detail why he does not like Pedrillo. Also in Act 1 is "Wer ein Liebchen hat gefunden," when he sings a song while picking figs, not realizing that Belmonte is watching. His song advises the listener to reward your love with kisses and make her life great. It also advises the young lover to lock up your woman's other lovers, lest they tempt her to forget her faithfulness. 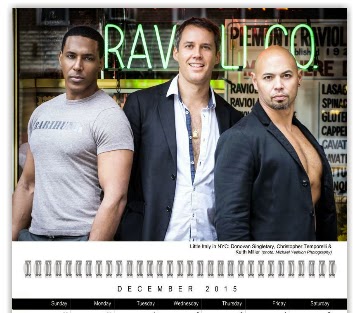 Time is running out to buy your 2015 Barihunks Charity Calendar, which you can order for the next 5 days by clicking below.