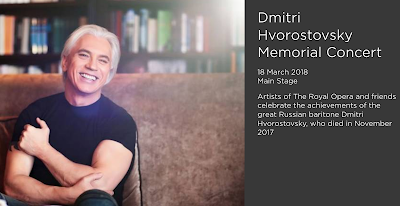 On Sunday, March 18th,  The Royal Opera in London will present a memorial concert in honor of Dmitri Hvorostovsky, who died on November 22, 2017.

The concert will feature many of his friends and colleagues and will be conducted by Antonio Pappano with the Royal Opera Chorus. Tickets will go on sale on Monday, March 12th and will be limited to four per person. A cast list has not been posted as of this date.

Dmitri Hvorostovsky made his Royal Opera debut as Riccardo in I puritani in 1992 and appeared in nearly every season from 2001 to 2015. His roles included the great Verdi baritone roles such as Rigoletto, Count di Luna in Il trovatore and Giorgio Germont i La traviata, as well as Valentin in Faust and Tchaikovsky’s dashing Eugene Onegin (the role in which he made his final appearances with the Company in 2015.)

Hvorostovsky considered The Royal Opera his home company, and was much-loved for his glorious voice, big heart and generosity of spirit. He died at his home in London with his wife Florence by his side.