The Hamburg State Opera kicked off its Mozart/Da Ponte trilogy of opera with the premiere of Don Giovanni on October 20th featuring the barihunk trilogy of Andrè Schuen in the title role, Kyle Ketelsen as Leporello and Alexander Tsymbalyuk as the Commendatore. Additional performances are on October 23, 26, 29 and November 3, 6 and 9. 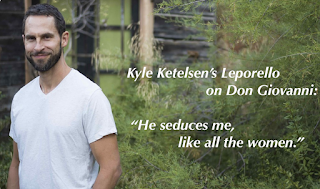 On October 22, they will add Così fan tutte to the rotation with barihunk John Chest as Guglielmo.  Additional performances will be on October 22, 27, 31 and November 2. The final opera will be Le Nozze di Figaro, which opens on November 1, with additional performances on November 5, 8 and 12. The cast features barihunks Christoph Pohl as the Count and Wilhelm Schwinghammer as Figaro.

Tickets for all three operas are available online.

If you can't make it to an Hamburg or another opera house featuring Don Giovanni, you can watch a performance from the Teatro dell’Opera di Roma on Oct. 26, 2019 on OperaVision. The cast includes barihunk Alessio Arduini in the title role, along wtih Vito Priante, Emanuele Cordaro, Antonio Di Matteo, Juan Francisco Gatell, Maria Grazia Schiavo, Salome Jicia, and Marianne Croux. The livestream may not play in some countries.