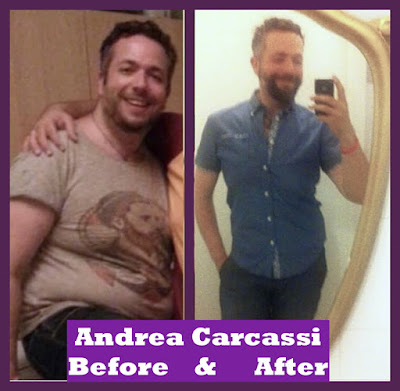 Our latest Bari-chunk to Bari-hunk is Andrea Carcassi, who recently lost 32 kilos (71 pounds) in 11 months.

"Needless to say I feel amazing," Carcassi told us when we contacted him. "My body was just ready to shed the weight and wanted me to lose it all and so did the theatres [he added with a laugh]."

"My personal life also has greatly changed," he told Barihunks. "I still have a long way to go and I now have to work on building lean muscle mass. I'll slowly get there. I have to say my work has benefited so much as well purely due to confidence and posture."


Carcassi made his professional debut upon graduation in 2008 as Dexter Fox in Green Room at the ChamberMade Opera. Later that year, debuted with the Melbourne Opera as Schaunard in Puccini's La bohème. In 2009, he joined Co-Opera in Adelaide for their national tour of Mozart’s The Magic Flute. He appeared in the same role for Co-Opera’s Europe tour, which included performances at the  Wiesbaden Festival.

His other operatic credits include Silvio in Leoncavallo's I Pagliacci and Morales in Bizet's Carmen with the Melbourne City Opera, Sapiente in Turandot for the Melbourne Puccini Festival, Marcello in Puccini's La bohème for Gippsland Opera, Sarastro in Mozart's Die Zauberflöte and Dr. Bartolo in Mozart's Le nozze di Figaro at the Hessisches Stattstheater in Wiesbaden

Finally, Carcassi told us, "It's an honor to be recognized by a group like Barihunks, which gives me even further impulse to achieve the body I want."