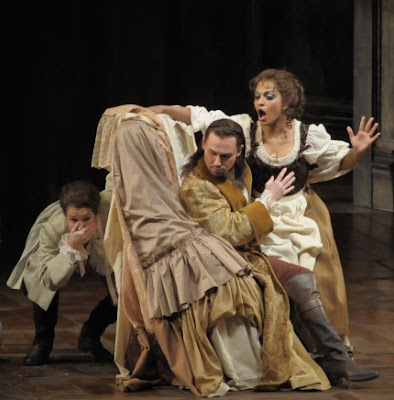 We've been focusing a lot on Mozart's "Don Giovanni" lately, but the Lyric Opera of Chicago has assembled a dream cast for their "Le Nozze de Figaro," led by the "Hot Pole" Mariusz Kwiecien's Count. Other performers include barihunk Kyle Ketelsen as Figaro, Danielle de Niese as Susanna, Anne Schwanewilms as the Countess and Joyce DiDonato as Cherubino.

Even with a great cast like this one, Kwiecien always seems to dominate the stage with great acting and his amazing voice. He is indisputably one of the most compelling performers in opera today.

More than most productions, this Lyric cast is dominated by Mariusz Kwiecien as the volatile, philandering Count. One can go a long time before hearing the tortuous Vedro, mentr’io sospiro delivered with this kind of technical ease and forceful malevolence. With his aristocratic bearing and saturnine presence, the Polish baritone owns this role like no other singer today, and his refined, commanding vocalism brought out the Count’s bluster as well as a surprising, touching vulnerability at the opera’s coda. 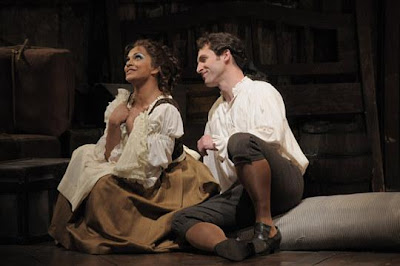 John von Rhein, the classical music critic for the Chicago Tribune, managed to include Kyle Ketelsen's barihunk status in his insightful review:

The "downstairs" servant couple, Kyle Ketelsen in the title role and Danielle de Niese as the maid Susanna, were finely balanced with their aristocratic counterparts, Mariusz Kwiecien as Count Almaviva and Anne Schwanewilms as the Countess.

Ketelsen, playing a good guy this time following his devilish turn as Mephistopheles in Gounod's "Faust" earlier in the season, brought a firm yet flexible bass-baritone to Figaro's two arias, "Se vuol ballare" and "Aprite un po' quegli occhi," in which the Count's manservant railed against the perfidy of women.

Since the comic drama turns on the extended battle of wits between Figaro and the Count — who has mounted an assault on the virtue of Figaro's intended, Susanna — the American "barihunk's" ability to create a virile, likable hero in both voice and manner, while keeping the recitatives crackling, was very much to the point. 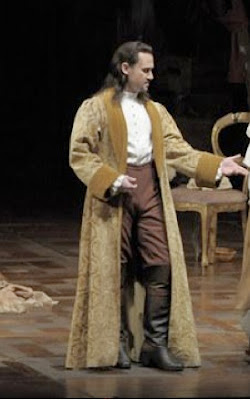 The Tribune also mentioned that Kwiecien brought down the house on opening night, an occurance that is becoming pretty common with this gifted performer and singer.

Kwiecien made a formidable predator through his baritonal command as well as the vain, aristocratic hauteur he brought to the philandering Count Almaviva. Figaro had all he could do to stay one step ahead of this libidinous bully. "Vedro, mentr'io sospiro," the third-act aria in which the Count vows to punish both servants, brought down the house Sunday.

Performances run through March 27th and you can get more information by contacting the Lyric Opera of Chicago.