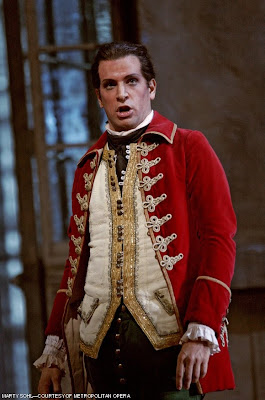 There are a number of barihunks who as individuals are worth the price of admission. Simon Keenlyside, Mariusz Kwiecien and Erwin Schrott certainly come to mind as singers who look good, are great actors and are also amazing singers. There are lesser known barihunks like Kyle Ketelsen, Wes Mason, Kelly Markgraf and Randal Turner who we feel also deliver the complete package night in and night out. However, if there is one barihunk who probably already belongs in a class with Keenlyside, Kwiecien and Schrott it is Luca Pisaroni.

His recent video of Ercole that we featured is a tour de force and he may already be one of the ten best exponents of Mozart in the world today. Period. Here are three clips of this gifted young singer performing Mozart, so that you can judge for yourself. Few singers can bring these characters to life like Pisaroni and his vocal nuances are nothing short of phenomenal.

Apparently, opera houses are recognizing his gifts as a Mozartean, as his schedule includes a current run of Figaro in Amsterdam, Leporello at Glyndebourne this summer, Figaro in San Francisco this fall and then the Count in Houston early next year. If you can make it to any of these performances, we guarantee that you will be in for a real treat.