Dmitri Vargin studied choral direction in his native city Samarkand, Uzbekistan, and singing at the State Academy of Music and Theatre in Hamburg, with William Workman. In Hamburg he had the chance to participate in master classes with artists such as Kurt Moll and Franz Grundheber. He also appeared in numerous productions performing Junius in The Rape of Lucretia, Peter in Hänsel und Gretel, Marcello in La Bohème, Pappacoda in Eine Nacht in Venedig, and Demetrius in A Midsummer Night's dream.

During his last year at the Academy, he appeared as a guest at the Deutsche Oper am Rhein in Düsseldorf performing Silvio in I Pagliacci and has been invited to join the company. At the Deutsche Oper am Rhein, he has sung Marcello in La Bohème, Papageno in Die Zauberflöte, Guglielmo in Così fan tutte, Demetrius in A Midsummer Night's Dream and in the new productions - Achilla in Giulio Cesare, Valentin in Faust, Pelléas in Pelléas et Mélisande, Belcore in L'Elisir d'Amore, and the title part in Eugene Onegin.

He also appeared at the Erfurt Opera as Papageno in Die Zauberflöte, at the Hamburgische Staatsoper as Tusenbach in Tri Sestri by Peter Eötvös, and performed Mahler's 8th Symphony with Maestro Lorin Maazel.

Following his debut at Bolshoi Theatre Moscow as Papageno in Die Zauberflöte, he has been re-invited to perform Marcello in La Bohème and Lopakhin in Fenelon's The Cherry Orchard.   He also made his South American debut performing the title part in Eugene Onegin (Montevideo).

Upcoming engagements include both Brétigny in Manon and Guglielmo in Cosi fan tutte (Düsseldorf), and Harlequin in Ariadne auf Naxos (Glyndebourne Festival), among others.   Dmitri Vargin has been granted by the DAAD and awarded with German Federal Cultural Prize (2004), the Masefield Scholarship by the Alfred Töpfer Foundation (2005), and he has been actively involved, with the Yehudi Menuhin "Live Music Now" program, in projects bringing music to people unable to attend regular concerts. 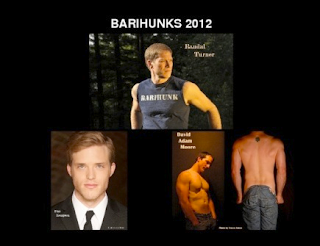 There are only two weeks left to order your 2012 Barihunks charity calendar. All proceeds will go to benefit the Portland Opera Studio and the Seagle Music Colony, two of the best young artist training programs in America. You can help out dozens of young artists by purchasing your calendar today. Click HERE and have your calendar before the new year.