Jesse Blumberg and David McFerrin, two barihunks who we've frequently featured on this site, just performed in Lehar's The Merry Widow with the Boston Lyric Opera. Not featured in the credits was another barihunk, Attila Dobak, who was in a minor role, but has major barihunk chops.

Dobak was born in Budapest, Hungary and studied clarinet when he was seven and piano when he was twelve. He was inspired to study voice after watching the 3 Tenors Concert with Luciano Pavarotti, Jose Carreras and Placido Domingo. He started studying voice at age sixteen and eventually was accepted into the Béla Bartok Conservatory of Music in Budapest, where he majored in Classic Voice and Opera. He also has a Masters Degree in Marketing & Communications from Corvinus University in Budapest. 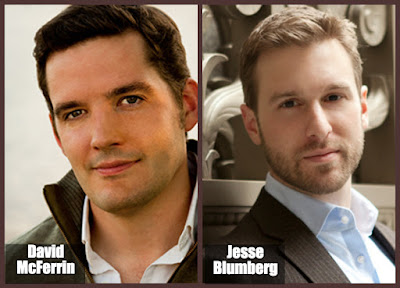 He went on to study at the Longy School of Music at Bard College in Cambridge, Massachusetts. At Longy and Opera North (where he was a young artist), he performed Bartolo and Figaro in Mozart's Le nozze di Figaro, Raimondo in Donizetti's Lucia di Lammermoor, and Gideon March in Mark Adamo's Little Women.


He is currently based in Boston, where he is a member of the Boston Lyric Opera. In addition to The Merry Widow, he appeared in their production of Puccini's La boheme.

His goal in life is to become an opera/crossover singer and you can find examples of him singing opera on his YouTube page, as well as covers of Bruno Mars, Josh Groban and Broadway musicals.
at 7:57 AM