Kwiecien, Kelly, Varnier, Trevino and a dose of Don Giovanni


For you legions of Mariusz Kwiecien fans, there are two videos of the Hot Pole on Polish television. One of the clips includes extensive performance footage and backstage shots. Even if you don't understand a lick of Polish, these are worth watching. (WARNING: We had a hard time getting the videos to work. Click on the STOP button and then hit PLAY). You can watch both videos at Dzień Dobry TVN. Kwiecien is currently in Poland singing Halka and Don Giovanni.


A few of our readers have written in to inform us that the Don Giovanni from La Scala that we posted about yesterday will be broadcast today on Italian radio at RAI 3. The broadcast begins at 6 PM Milan time (Noon EST/9 AM PST).

The gifted young barihunk Michael Kelly will be joining sopranos Victoria Browers and Mary Mackenzie tonight at the WMP Concert Hall in New York City for a night of music by Franz Liszt. We couldn't help but notice a bit of a similarity between the striking composer and the equally eye-catching Michael Kelly. Liszt songs include "Was Liebe sei?," "Freudvoll und Leidvoll," "Die Lorelei",  and"Die Fischerstochter, " as well as music by Debussy, Wolf and Rachmaninoff. Visit the SongFusion website for additional information.


French barihunk Jérôme Varnier will be performing a recital on Thursday night at the Temple Saint Marcel in Paris, France. The program includes lieder by Mozart, Schubert, Ravel, Ibert as well as Argentinian music from de Ginastera, Buchardo and Aguirre. Visit the Musicatem website for additional information. 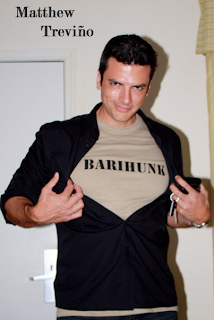 We have to give a shout out to one of our favorite low voices, Matthew Treviño, who received rave reviews for his performance as Sarastro. The role seldom gets singled out in a review, but Treviño majestic bass caught the attention of Terence Blain in the Irish Theater Magazine:

"But it was Texan bass Matthew Treviño who truly galvanised attention: his Sarastro was magnetically sung and acted, an eerily hermetic presence with an insinuatingly malevolent agenda (he manhandles Pamina creepily during one aria). Sarastro’s part goes very low musically, but Treviño’s bottom Fs were unpinched and beautifully supported, his sonorous, burnished tone and clear enunciation a source of constant pleasure."

You can see Treviño in our 2012 Barihunks charity calendar. Copies are still available HERE. But now before they're either all gone or January 1, 2012 has rolled in. You won't want to miss one day of this sexy calendar.
at 6:33 AM