Zachary James prepares for Met debut with a little Cabaret

Barihunk Zachary James made quite a splash with his super sexy, scantily clad performance of Sally Bowles' "Maybe this time" from Cabaret at the Bearded Ladies’ Late Night Snacks Cabaret, part of Opera Philadelphia’s O19 festival and FringeArts. The lineup also includes the legendary gender bending performer Justin Vivian Bond, as well as opera legends Stephanie Blythe and Anthony Roth Costanzo. There a couple of remaining shows before the festival closes on September 29 and tickets are available online.

He said this of the festival. "Several of the singers from Opera Philadelphia’s O19 festival were invited to participate in Late Night Snacks Cabaret in South Philly produced by The Bearded Ladies, a month long nightly event included in this year’s Opera Philly O19 festival and Philly FringeArts festival. We love what we do as opera singers but also all have cravings to step outside of the box and explore our versatility. Late Night Snacks hosted Stephanie Blythe screlting rock and busting out Carmen with ukulele, Anthony Roth Costanzo singing jazz in a smooth baritone, Alissa Anderson belting You Don’t Own Me, Will Liverman singing gospel accompanying himself on piano like a beast, and many more stunning turns. This was a time and space to let our hearts out and explore our hidden desires as artists."

James will also be making his Met debut alongside his Late Night Snacks co-stars Anthony Roth Costanzo and Will Liverman, when he reprises his performance as Amenhotep III in Philip Glass' Akhnaten, which runs from Noevember 8-December 7. Tickets are available online.
at 7:24 AM No comments:

Marco Vassalli swashbuckling in Germany before making only U.S. appearance in 2019

German barihunk Marco Vassalli is performing Count Mondego (Graf von Mercerf) in Frank Wildhorn's The Count of Monte Cristo at the Stadtheater Bremerhaven with Vikrant Subramanian taking on the title role. Performances run from September 29 through June 10 and some shows are already sold out, so get your tickets online.

The musical was first work-shopped in New York City in 2008 with many of the cast members of Broadway's A Tale of Two Cities. The American professional premiere was produced by the Pioneer Theatre Company in Salt Lake City in May 2016. The German language version (Der Graf von Monte Christo) premiered at the Theater St. Gallen in Switzerland on March 14, 2009.

Vassalli will take advantage of a break in the schedule between his October 13 and 26 performances to make his only U.S. appearance. He will be reprising Clint Borzoni's Stufen with the Festival String Quartet, which was written for him and has proved to be immensely popular with audiences and on YouTube. He will also perform works by Leonard Bernstein and Franz Schubert along with the Piano Quintet in Eb major by Robert Schumann. Tickets are available online.
at 8:49 AM No comments:

The Cleveland Orchestra announced that it is extending the contract of Music Director. Franz Welser-Möst’s for five years until 2027, which would be his 25th anniversary with the company.

They also announced five operas for upcoming seasons, each featured a noted barihunk.

First up will be Berg's Lulu, which runs from May 16-22, 2020 and features Bo Skovhus as Dr. Schön. The all-star cast will feature Barbara Hannigan in the title role, Jennifer Johnson Cano as Countess Geschwitz and John Tomlinson as Schigolch.

Next up will be a performance of Verdi's Otello in the 2020-21 featuring barihunk Simon Keenlyside making his role debut as the evil Iago. No other cast information was available.

The 2021-22 season will also include Wagner's Parsifal featuring barihunk Hanno Müller-Brachmann as Amfortas, along with tenor Piotr Beczala in the title role, mezzo-soprano Okka von der Damerau as Kundry and bass Peter Rose making his role debut as Gurnemanz.

The 2022-23 will undoubtedly feature a slew of barihunks in Puccini's almost all-male cast in  La Fanciulla del West. Bass-barihunk Eric Owens and soprano Tamara Wilson will both be making role debuts as Jack Rance and Minnie respectively.

The 2023-24 season will feature an all to rare U.S. appearance by Ludwig Mittelhammer, who will be features as Papageno in Mozart's Die Zauberflöte. He'll be joined by tenor Julian Prégardien as Tamino and bass Peter Kellner as Sarastro. 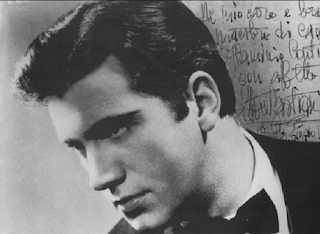 It is no secret that one of our favorite barihunks of all-time is Ettore Bastianini. We feature him whenever we have an excuse, but what's better than his birthday. Like the German tenor Fritz Wunderlich, we lost him long before his artistry was fully realized. Bastianini died of throat cancer at the age off 44, long before many baritones celebrate their greatest successes.


Bastianini was considered one of the finest Verdi and verismo voices of his day. He made his recital debut as a bass in Siena in 1945 and his stage debut later that year in Ravenna as Colline in Puccini's "La bohème." He later moved into the baritone range where he voice seemed better suited. His top notes thrilled audiences throughout his career for their ringing splendor.

In 1962, he was diagnosed with a throat tumor. He struggled with the disease until his death in 1967 singing his final performance on December 1, 1965, at the Metropolitan Opera.

Erwin Schrott is currently performing the title role in Mozart's Don Giovanni at the Royal Opera House in London, which runs through October 10th. If you can't make the performance, you're in luck, as it will be shown in theaters in 53 countries encompassing 1,000 movie houses. Screenings will be on October 6 and 13.

Schrott will be joined by barihunks Roberto Tagliavini as Leporello and Leon Košavić as Masetto, along with Malin Byström as Donna Anna, Daniel Behle as Don Ottavio, Christine Rice as Donna Elvira, Louise Alder as Zerlina and Peter Magoulas as the Commendatore.

Kasper Holten’s production casts Don Giovanni as an artist who thrives on an audience enticed by his creative gifts.

Schrott next heads to the Teatro Real in Madrid to perform Dulcamara in Donizetti's L'elisir d'amore from October 29-November 12.  Tagliavini heads off to the Opéra de Lyon to sing de Silva in Verdi's Ernani opening on November 8th. Košavić will head to the Opera Vlaanderen to sing Herzog Alba in Schreker's rarely performed Der Schmied von Gent.
at 7:50 PM No comments:


The Wigmore finals. Timoshenko appears at 2:03:00

He joined the Paris Opera Academy in September 2015 and during the 2015-16 season he participated in several of the Academy’s concerts and recitals at the Bastille Amphitheatre. He sang in the French premiere of Joanna Lee’s Vol Retour and performed the role of Plutone in Monteverdi’s L’Orfeo.

Just four years after the premiere of composer Pascal Dusapin's Penthesilea, he back at the La Monnaie with his newest opera, Macbeth Underworld. The opera is being described as "...a bloodstained Gothic opera, in which the ill-fated couple is condemned to relive its own tragedy, haunting their memory and ours."

Dusapin was less inspired by Shakespeare and Verdi than the cinematic versions of Macbeth for his latest creation, which runs from September 20-October 5. A major inspiration was Roman Polanski’s 1971, a commercial failure that was criticized for its depictions of graphic violence and nudity.

Dusapin knew immediately that he wanted barihunk Georg Nigl for the title role, commenting, "For Macbeth himself it was all much more straightforward. I wanted Georg Nigl. It is my fifth production with him and he can take on anything, from incredible expressiveness through tenderness to absolute folly. The short description on his score just says ‘Macbeth est fou’ – Macbeth is mad. He doesn’t need more than that.”


For Lady Macbeth, he drew inspiration from Judi Dench's performance in the 1979 film version. Dusapin said, "Judi Dench was a great model for the scene in which Lady Macbeth washes her hands. The rhythm of her words is spot-on. I copied them out and used them in Macbeth Underworld.”

The remainder of the cast includes Magdalena Kožená as Lady Macbeth,  Graham Clark as Porter and Kristinn Sigmundsson as the Ghost. Tickets are available online.
at 5:32 PM No comments: