Vasil Garvanliev gets a new tattoo

There are few singers who photograph better than Vasil Garvanliev, who we discovered while he was singing at Opera Atelier. Of course, Opera Atelier has become famous for their sexy, provocative marketing campaigns that often features models in various states of undress. Even though they use models, they seem to hire singers who could double as models in their ad campaigns. In addition to Garvanliev, we've featured Olivier Laquerre, Curtis Sullivan, Phillip Addis and João Fernandes from the company roster. 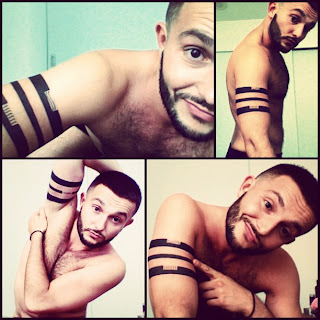 Although most of our news is about singing, we couldn't resist telling readers about Garvanliev's new tattoo which he had placed on his arm above the LOVE tattoo that appears on the back of his wrist. The photo below shows the design, the procedure and the final tattoo. We think it's pretty HOT.

The Macedonian barihunk is a young artist at the Glimmerglass Festival this summer, which of course is run by the "Mother of Barihunks," director Francesca Zambello. Future appearances include Caspar in Weber's Der Freischütz with Opera Atelier and Pistola in Verdi's Falstaff with Calgary Opera.