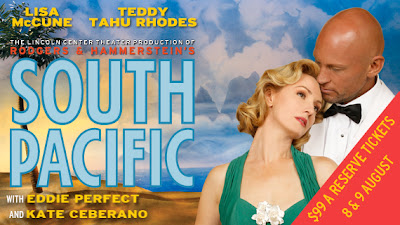 You're more likely to spot a wombat while wandering around Coopracambra National Park than finding a video of Teddy Tahu Rhodes online. For some reason, the Kiwi Barihunk is one of the most underrepresented singers online, which has frustrated his legions of fans for years. He's one of the few big name baritones who doesn't have his own website or blog. It seems like the man we affectionately call "Teddy Bare" prefers his surfboard on a quiet beach to the clutter of the internet.

Now that he's touring in the popular production of Rodgers and Hammerstein's South Pacific in Australia, videos are finally making their way onto the internet. Here he is singing "Some Enchanted Evening" at the Sydney Opera House.

The Tony Award-winning show, which was directed by Bartlett Sher and starred barihunk Paulo Szot at Lincoln Center will be playing for a month in Sydney begging on Thursday, August 9th. About a third of the shows are already either sold out or near capacity. Click HERE for tickets.

The production is part of Opera Australia's aggressive effort to expand their audience. It seems to be paying off, as the Guardian reports that the company's overall funding, including sponsorships, has risen from $A70m to $A100m.


On the other side of the globe, another Kiwi barihunk has taken San Francisco by storm. Hadleigh Adams, who is part of the 2012 Merola Opera Program, stole the show with his performance of the final scene of Act 2 of Bizet's "La Jolie Fille de Perth" at Merola's Schwabacher Summer Concert.

The San Francisco Chronicle wrote, "The evening's standout was Hadleigh Adams, a formidable bass-baritone from New Zealand who in his only appearance on this program deployed a robust, beautiful tone with both flexibility and power."
Adams will return to the stage one more time on August 18 at the Merola Grand Finale where he will perform “Somnus awake! ... Leave me loathsome light … More sweet is that name”  from Handel's Semele with Suzanne Rigden and Erin Johnson. A number of other barihunks will be performing in the Finale, including Seth Mease Carico as Don Giovanni and Mustafa, Joseph Lattanzi as Jupiter in Offenbach's Orphée aux Enfers, Gordon Bintner as Leporello and Belcore, and Matthew Scollin in Lully's Alceste. Visit the San Francisco Opera website for ticket information.