We say it every year, if you don't have the Fort Worth Opera Festival on your travel itinerary then you missing one of the best festivals in the United States. Although the festivals at Glimmerglass, Spoleto and Santa Fe might be better known, the quality and innovation at Fort Worth Opera is unsurpassed. General Director Darren Woods has created one of the most entertaining festivals in the United States with a mixture of operatic standards and fascinating contemporary works.

This year's standard fare includes Puccini's La boheme, Strauss' Ariadne auf Naxos, Donizetti's Daughter of the Regiment and Puccini's La boheme featuring another of our favorite young barihunks Wes Mason. The contemporary work this year is Tom Cipullo's Glory Denied and it's all the buzz in Fort Worth due a bunch of bus benches featuring barihunk Michael Mayes that are literally stopping traffic. 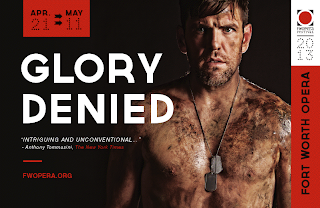 Mayes will portray Colonel Floyd James (Jim) Thompson, America’s longest-held prisoner of war. The opera by Tom Cipullo looks back on Thompson's years as a captive in Vietnam and features Mayes in the title role. Fort Worth Opera often challenges their ticket holders with new works and the productions are often the audience favorites. Last year they featured Mark Adamo's comedy  Lysistrata that had audiences rolling in the aisles and the previous year they offered Philip Glass' Hydrogen Jukebox that became the hottest ticket in town.

If this year's fare is half as great as their ad campaign, they have another hit on their hands. Michael Mayes was one of the stars of Lysistrata and he showed off his comic skills to great effect. But readers of this site will know that his dramatic skills recently prompted composer Jake Heggie to say that Mayes was the definitive Joseph De Rocher in his opera Dead Man Walking.

Tickets and additional information about the Fort Worth Opera Festival are available on their website.