The brilliant, dark and provocative performance of Ambroise Thomas' Hamlet from La Monnaie will be available online until June 17, 2014. Conductor Marc Minkowski and Director Olivier Py have been combining forces in exploring the 19th-century French Grand opéra repertoire with great success. In 2011, they collaborated on a highly-acclaimed production of Meyerbeer's Les Huguenots.


Olivier Py has become well known for his generous display of male skin in his productions and Hamlet doesn't disappoint. There is an extensive scene that takes place in a bathtub with Stéphane Degout's Hamlet and his mother Gertrude, played by Jennifer Larmore. Even Lenneke Ruiten's Ophélie finds the perfect way to go mad - surrounded by four shirtless men in leather animal masks. 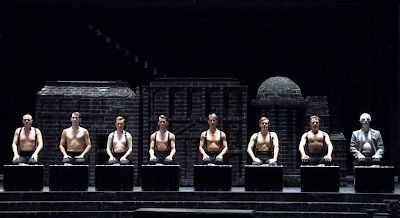 If you don't speak French or aren't familiar with the opera, you may want to download a copy of the libretto before watching, as the subtitles are in French. Click HERE to watch the performance. Because we know that you're going to fast forward to it anyway, the bathtub scene starts at 1:49.

Although the abundance of skin will certainly be a draw to many, the vocal performances are stunning, led by Stéphane Degout and Lenneke Ruiten.

There is only one week left to purchase your 2014 Barihunks Charity Calendar, so order it today!!! All proceed go to benefit young artists.