Sneak preview of rehearsal for Marco Vassalli's US debut

Rehearsals kicked off for the upcoming U.S. debut of Marco Vassalli with Musica Marin, who is performing the world premiere of the new Clint Borzoni songs for String Quartet & Baritone along with songs by Schubert, Richard Strauss and Tosti. He'll also be performing Samuel Barber's beautiful and moving Dover Beach, one of the few other pieces scored for String Quartet & Baritone.

Portions of this concert were funded by sales of the 2016 Barihunks calendar, so we would like to personally thank everyone who bought a calendar! Every year we donate proceeds to promote young artists and works written for baritone or bass. This year, we plan on funding a special baritone/bass prize at a major singing competition.

Vassalli's debut performances with Musica Marin are on Friday, January 22 and Sunday, January 24 in San Francisco. The German-Italian baritone kicked off rehearsals with accompanist Ronny Michael Greenberg, a current Adler Fellow at the San Francisco Opera and former participant in the Merola Opera Program. The Sunday matinee is almost sold out, but there are still tickets for the Friday night performance. Tickets for both shows are available on the Musica Marin website.

Here is a sneak preview of them rehearsing Schubert's Nacht und Träume.


Rehearsals for the Borzoni songs with texts chosen by Vassalli begin on Monday with the composer and members of the Musica Marin quartet led by Ruth Kahn. Vassalli chose Hermann Hesse's Stufen and Hilde Domin's Margere Kost, making these the first German language texts set by the composer. Our first charity calendar helped fund a performance of Borzoni's beautiful setting of Walt Whitman's "I Dream’d in a Dream" sung by Randal Turner, which you can listen to HERE. 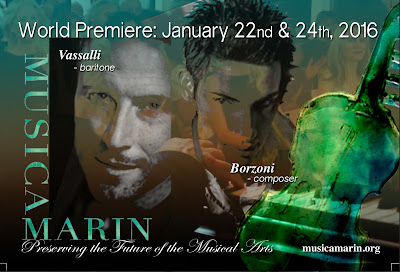 Borzoni, one of the most talented of many gifted American composers on the scene, recently completed his fourth opera, When Adonis Calls, based on the poetry of Gavin Dillard and arranged by John de los Santos. The opera was presented at Fort Worth Opera’s 2015 Frontiers Showcase. He is currently working on his fifth opera, The Copper Queen, also with librettist John de los Santos for Arizona Opera’s program, Arizona Spark.

Vassalli just wrapped up a performance of Leonard Bernstein's Candide at the Staatsoper Hannover. He grew up on Lake Constance and began his studies at the Hochschule fur Musik in Cologne, where he studied with the famed soprano Edda Moser.