Bass-baritone Brandon Cedel was one of nine early-career artists awarded a grant from the prestigious Leonore Annenberg Fellowship Fund for the Performing and Visual Arts. The Fund  awards $50,000 a year for up to two years to help promising artists make a breakthrough in their careers, broaden their skills, and achieve professional success.

The Leonore Annenberg Fellowship Fund has paid or pledged more than $5.5 million in career-development grants to artists, including the current group, over the last nine years. The funding has enabled promising artists with world-class talent to film a movie, record new music, experiment in performance, afford studio time or training, buy materials, pay for living expenses and pay down student debt. The fellows, selected in consultation with partners such as The Public Theater, American Ballet Theatre, and the Perlman Music Program, work with mentors chosen by the partners and the Leonore Annenberg Fund. 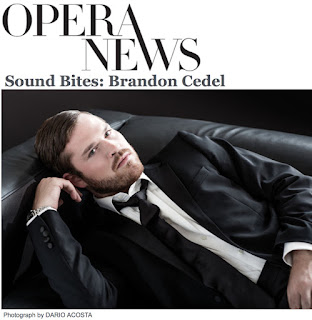 Cedel just appeared in the Pittsburgh Opera production of Rossini's The Barber of Seville with his husband, fellow barihunk Jonathan Beyer. Upcoming performances include Figaro in Mozart's Le nozze di Figaro at Opera Philadelphia, Masetto in Don Giovanni at the Münchner Opernfestspiele, and Leporello at Glyndebourne.

Cedel will join Oper Frankfurt in 2016 when he completes his third year of the Metropolitan Opera's Lindemann Young Artist Development Program, which sponsored him. A graduate of the Curtis Institute of Music, Cedel won a Grand Prize at the Metropolitan Opera National Council Auditions (2013) and a Richard Tucker Career Grant (2015). The New Yorker's music critic Alex Ross wrote of Cedel: "Capable of singing anything from Cavalli to Wagner, he may be destined for stardom."