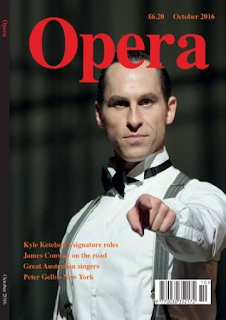 American bass-barihunk Kyle Ketelsen is the cover boy on the October 2016 edition of OPERA magazine.

The article points out that Ketelsen has sung all four low-voiced roles in Mozart's Don Giovanni, but that Leporello has become his signature role. We've also called Ketelsen the "definitive Leporello" in previous posts. The magazine article quotes three famous Giovanni's on singing the title role next to Ketelsen's Leporello. Here's what they had to say:

Russel Braun said, "...there are so many ways in which he identifies with Leporello; his kind of patience, very useful onstage, gives strength to the character."

Finally, Simon Keenlyside added, "Kyle's voice is one of the most beautiful bass-baritone sounds around; he wields the instrument with consummate legato and artistry to match. On stage he is everything a colleague could want...When I know I have Kyle alongside me as Leporello, I know I will be in safe hands. Any Giovanni with a great Leporello alongside him will be so much more than he could ever have been on his own."

Kyle Ketelsen can next be seen at the Opernhaus Zürich in Gounod's Faust, which runs from September 20-October 7. The all-star cast includes Charles Castronovo in the title role, Anita Hartig as Marguerite, Lilly Jørstad as Siebel and Kyle Ketelsen as Méphistophélès.
at 10:55 AM