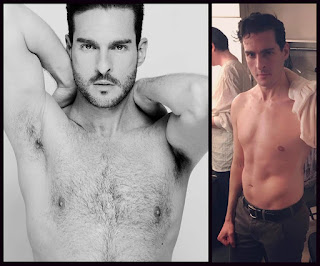 Michael Kelly, who appeared in our very first Barihunks calendar, had to do a little grooming for his latest performance as an actor known for playing female characters in the 17th century.

Set in Restoration England during the time of King Charles II,  composer Carlisle Floyd's Prince of Players follows the story of Edward Kynaston, a Shakespearean actor famous for his performances of the female roles in the Bard's plays. Samuel Pepys once called Kynaston "the loveliest lady that ever I saw in my life" and a performance of his was once delayed when he was playing the Queen, as he "was not shav'd."

In the opera, when the King grants permission for women to appear onstage, and forbids male actors from continuing to appear in female roles, Kynaston must relearn his entire craft or face the end of his career.

Adapted from Jeffrey Hatcher’s play A Compleat Female Stage Beauty and the subsequent 2004 film Stage Beauty, the opera was commissioned by the Houston Grand Opera. It received its world premiere this past March 2016 at the HGO Studio. Since the performances in Houston the composer made a few small revisions, which will be heard for the first time in this production by the little OPERA theatre of ny at The Kaye Playhouse at Hunter College. Kelly will perform on February 23 and 25, alternating the role with Shea Owens, who performs on February 24 and 26.

On March 17th you can catch Kelly as Count Gil in Wolf-Ferrari’s one-act comic intermezzo Il segreto di Susanna with The Orchestra Now at Carnegie Hall.
at 8:07 AM