Barihunk trio in BariToned at The Green Room 42 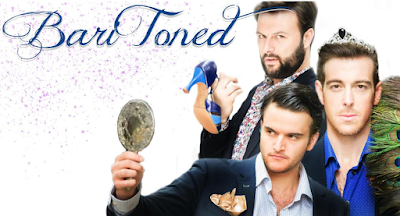 The show includes Broadway hits like "Hey Big Spender" from Sweet Charity, "Bring On The Men" from Jekyll & Hyde, "There Are Worse Things I Could Do" from Grease all mashed up together to create songs about men and their proclivities, all delivered with some gender-bending fun.

Miskie is a New York-based Pennsylvania native who has performed Julian Marsh in 42nd Street, Cinderella's Prince/The Wolf in Into The Woods, Fred Graham in Kiss Me Kate, Adam Pontipee in Seven Brides for Seven Brothers, and many more. We recently posted about his book "Cancer, Musical Theatre, and Other Chronic Illnesses" which is available on Amazon and Kindle.

Brian Krinsky also hails from Pennsylvania and was on the national tour of Anything Goes as Billy Crocker and Beauty and the Beast as the Beast/Gaston understudy. He is a regular at the White Heron Theatre Company in Nantucket where he recently portrayed Versati in "The Underpants."
Joe Hager is a New York-based Kansas native who has performed Dennis Dupree in Rock of Ages with Norwegian Cruise Lines for the last seven years. Additional credits include the National Tour of Beauty and the Beast as Gaston, the international tour of Phantom of the Opera as Monsieur Richard,  Tom MacKennle in the Seven Year Itch at the York Theatre. Additional credits include Javert in Les Miserables at the Palace Theatre, Sky Masterson in Guys & Dolls at the Metropolitan Ensemble Theatre, Macheath in The Three Penny Opera at the Brevard Music Center, and Marcello in La boheme at Hidden Valley Opera.