The last we featured New Zealand barihunk Edward Laurenson three years ago, he was off to London to commence his Masters in Music studies at the Guildhall School of Music and Drama. He has now landed across the globe in California, where he's studying at the San Francisco Conservatory of Music. He has now studied on three continents in three years!

On December 8th and December 10th, he'll be performing Tarquinius in Benjamin Britten's The Rape of Lucretia at the Conservatory. He'll be joined by fellow barihunk Jorge Ruvalcaba as Junius, Brandon Bell as Collatinus, Molly Boggess as Lucretia, Esther Tonea as the Female Chorus, Ricky Garcia as the Male Chorus, Jessie Barnett as Bianca, and Meagan Rao as Lucia. [Click on the dates for tickets].

The fully-staged production is part of the Conservatory's thematic programming surrounding the institution's centennial celebrations for the 2017-18 season, which is comprised of 20th- and 21st-century repertoire.

Laurenson was an Emerging Artist with The Dame Malvina Major Foundation, as well as Vocal National Young Performer of the Year at Performing Arts Competitions Association of New Zealand, won the Lieder prize at the New Zealand Aria competition, won the Guildhall School of Music & Drama Award, the Australian Opera Awards Committee’s Sheila Prior Memorial Prize, the Phoebe Patrick Award and the David Harper Award.

Mexican baritone Jorge Ruvalcaba is new to this site. He was the winner of the Coppel Prize VIII in the  Concurso Internacional de Canto Sinaloa in 2016, the Edgar Mason Kneedler Memorial Prize Opera San Miguel 2015, won special prizes for best interpretation of Mozart and for the best interpretation of aria at the XIX Maritza Alemán Singing Contest. He has performed Marcello at Opera de Oazaca, the title role of Don Giovanni a the Escuela Superior de Música and Papageno at the Teatro Alameda. 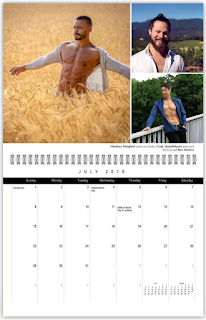 ONLY 29 DAYS LEFT TO ORDER our 2018 Barihunks Calendar, which includes 20 of opera's sexiest men is now available for purchase HERE. In response to reader demand, we've also added a Barihunks Photo Book this year, which includes additional photos that don't appear in the calendar. You can purchase that HERE. The New Year is approaching faster than you think!