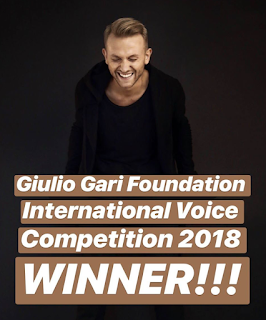 
Hubert Zapiór sings an aria from Moniuszko's "The Haunted Manor":

Giulio Gari  was a tenor who sang throughout the US, Europe and Central America. He was invited to sing at the Metropolitan Opera by Sir Rudolf Bing, where he debuted as Lt. Pinkerton in Puccini’s Madama Butterfly alongside the legendary soprano Licia Albanese. He was a leading tenor at the old New York City Opera for eight seasons.

Zapiór graduated from Fryderyk Chopin University of Music and Aleksander Zelwerowicz National Academy of Dramatic Art in Warsaw, Poland and currently studies at Juilliard. This season he made his debut at the Teatr Wielki as Papageno in the Barrie Kosky’s production of Mozart's Die Zauberflöte and as Herr Fluth in Nicolai's Die lustigen Weiber von Windsor at the Juilliard Opera.

On June 1st, he will appear as the Beast in Beauty and the Beast at the Tauron Arena in Kraków, Poland. Tickets are available online.