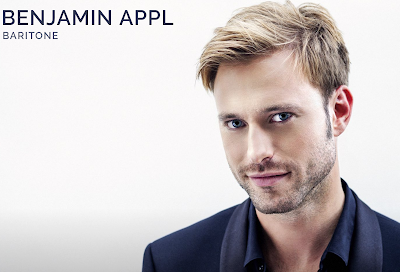 German barihunk Benjamin Appl, who has become one of the leading lieder recitalists in the world, has announced his first U.S. tour.

He will begin his tour in New York City for three nights at the Park Avenue Armory. On January 6th he will perform Schubert's Die schöne Mülllerin, followed by Schubert's Schwanengesang on January 8th and the composer's Winterreise on January 10th.

He then heads to Portland, Oregon on January 13th, New Orleans on January 15 and 16, Cleveland on January 18 and finally Washington D.C. on January 20th. Those recitals will variously feature music by Schubert, Schreker, Schumann, Duparc, Grieg and Nico Muhly's "The Last Letter," a collection of five songs based on letters sent by soldiers during World War I. The piece was commissioned by the Barbican for Appl in 2015.

He will be joined on the tour by his frequent accompanist James Baillieu.