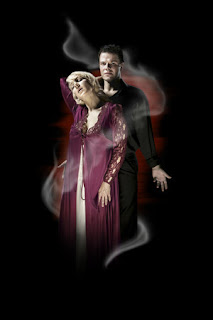 What better news as Halloween approaches than to report that Romanian barihunk Eugene Brancoveanu has been cast as Dracula. This role is non-operatic and will introduce the dramatically intense and insightful singer to a whole new audience. Brancoveanu took the San Francisco Bay Area by storm with his edgy and original portrayal of Don Giovanni with the Berkeley Opera and the Livermore Valley Opera.

The performances with the Center Repertory Company will run from October 22 through November 20 at the Lesher Center for the Performing Arts.

Here's a highlight from an article about the production in the Walnut Creek Patch:

At least temporarily. Butler said he has found his ideal Dracula in Brancoveanu, whom he first saw in the title role in Berkeley Opera's production of Don Giovanni.


He's one of the hunky baritones tracked on barihunks.blogspot.com.


"I'd never seen a performance like that, especially in an opera," Butler recalls. "It was like a rock star performance, wildly creative. In the Dracula rehearsals, Eugene has been fantastic. He's a maniac, fearless. He comes up with great ideas, he's very bold, and he's got the physicality to pull them off."


In the Bay Area, Brancoveanu has sung the Pilot in The Little Prince and Belcore in L'elisir d'amore for San Francisco Opera and the Count in Livermore Valley Opera's Marriage of Figaro. He also sang the role of Marcello in Baz Luhrmann's La Boheme on Broadway. And he took many leading roles with the Romanian State Opera.


"Eugene told me that as a Romanian, he just had to play Dracula," Butler recalls. "He said, 'He's our national hero!' "