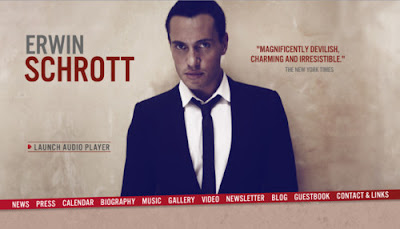 Erwin Schrott's, who already had one of the best websites for an opera singer, has given his site an overhaul. It appears the redesign revolves around the release of his new recording "Rojotango," which will be released on April 17 at the new site. Check it out HERE.

Also, we're waiting for David Krohn's new website to launch today, as well. [UPDATE: An astute reader has pointed out that Krohn's website was scheduled for an update on March 4,, 2010, not 2011].