Imbrailo back as Billy Budd (as Britten and Melville intended)


Jacques Imbrailo, who recently starred in a somewhat controversial production of Billy Budd at Glyndebourne, is tackling the title role in a different production. Imbrailo will perform in the heralded Richard Jones production that we previously saw Peter Mattei perform at Frankfurt.

Imbrailo created a bit of a tempest before the Glyndebourne run with some comments he made in the Sunday Times that suggested to some that he was trying to take the gay element out of the opera. Here is an excerpt;

Imbrailo features on a website called barihunks.blogspot.com, whose breathless preview of Billy Budd is: “Let’s hope the production is shirtless.”

“They’re going to be disappointed,” says Imbrailo. “That’s a lazy way to characterise; Billy swinging round pipes. He doesn’t have to be a gym bunny.” Never mind Billy’s biceps, Imbrailo would rather emphasise his goodness.

Barihunks was besieged with emails and comments not just from readers, but from people involved with the production who felt that "stuffy" Glyndebourne was trying to rewrite the story to make Claggart troubled with Billy's "goodness" and removing the gay attraction. Of course, the current production is in the Netherlands where they celebrate rather than run from gay themes in opera. This production's Claggart, Clive Bayley, makes it clear in the preview video that Claggart is clearly gay and attracted to Billy, but decides to destroy what he loves.


Assuming he needed to redeem himself, Imbrailo has clearly done it in this production. One Dutch reviewer described Imbrailo and "vigorous" and "charismatic" with just the right baritone sound. He clearly didn't shy away from portraying a sexy Billy Budd and he appears to have redeemed himself with those "disappointed" Barihunks readers he previously referenced.


The Netherlands Opera has added a Gay Date Night on March 25th for the current of the opera. Details can and ticket information are available on their website. We hope that Glyndebourne does the smae thing when they mount Billy Budd again. 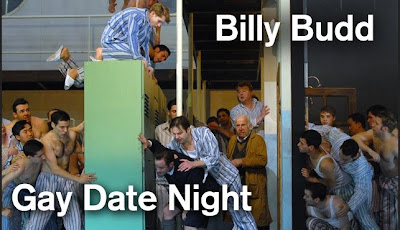