Come from behind Opera Couple?: Still time to vote (Also apologies to another couple and Schrott's new hair)


We've always known that Jonathan Beyer is competitive and a winner. In fact, we've blogged about his penchant for winning major voice competitions, usually be nailing John Adams' "News has a kind of mystery..." from "Nixon in China." We had a difficult time finding some video, but you can click HERE and listen to "News..." and other arias sung by Beyer.

Apparently, that competitiveness is playing out in our "Favorite Opera Couple" competition, as he and his baritone partner Brandon Cedel have made a stunning leap into first place. You can listen to Cedel HERE.

Today is the last day to vote, so make sure to let us know who your favorite opera couple is. In the meantime, we'll keep searching for a Beyer/Cedel video.

Also, we received some pointed emails asking why Patricia Racette and Beth Clayton weren't included in the poll. It was an unfortunate oversight. To make up for the error, here they are as part of the "It Gets Better" campaign:

We also received some email about Erwin Schrott's hair, particularly if the photo we used was recent. The photo is from an event last weekend and the popular barihunk is indeed a blond now. Here's a better picture. 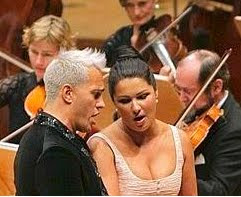