We've said it numerous times, but it's worth repeating: Some of our favorite barihunks have been reader submissions. We have a couple of them to share with you this week beginning with Pennsylvania native Jeffrey Williams, who was spotted by a loyal reader in Philadelphia.

This past summer, Williams attended the Russian Opera Workshop at the Academy of Vocal Arts in Philadelphia.  Following his time at the Russian Opera Workshop, he spent the remainder of the summer with barihunk Tom Krause at the Mozarteum in Salzburg, Austria and in Sachrang, Germany.  Previously, he studied abroad at the University of New South Wales in Sydney, Australia, with French baritone, Didier Frédéric.  For two summers, Williams also attended Middlebury College’s German School and German for Singers program, studying with the late James McDonald, Ruth Ann McDonald, and Bettina Matthias.

He will be Papageno in Mozart’s The Magic Flute with the University of Miami’s Frost Opera Theater and the Young Patronesses of the Opera (FGO) In-School Opera program with 35 performances throughout Miami-Dade and Broward counties January-March 2013.  Ticket information will be made available in early January. Performances will also be streamed live online. 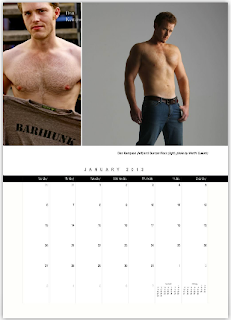 Don't forget to buy your 2013 Barihunks Charity Calendar before the New Year begins in three weeks: