Dmitri Hvorostovsky's anticipated reprisal of the title character of Verdi's classic operatic tragedy Rigoletto is happening on Friday, May 17 at the Teatro di San Carlo. Gilda will be sung by Desirée Rancatore and performances run through May 25. Fellow barihunk Christopher Margiera is also in the cast as Marullo.

From June 2-12, the "Siberian Hunky" joins the Orchestra dell'Accademia Nazionale di Santa Cecilia for concert performances of Verdi's Un ballo in maschera under the baton of music director Antonio Pappano. The concerts also feature Liudmyla Monastryrska and the thrilling Ulrica of Dolora Zajick. 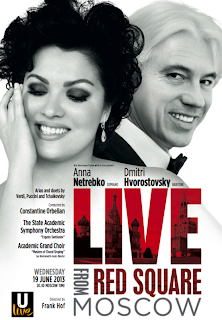 On June 19, Dmitri will star in a spectacular open-air concert at Moscow's Red Square. Led by Constantine Orbelian, Hvorostovsky will be joined by Russian soprano Anna Netrebko for the landmark performance. The concert will be televised live on RUTV, with broadcasts scheduled on the Arte network and ZDF. We'll have additional details in a future post.

Netrebko, of course, is the wife of barihunk Erwin Schrott. They will be performing together at the Red Ribbon Celebration Concert in Vienna on May 24th.
at 7:56 AM