Andrew Garland will be performing a recital of "Jewish Composers of the 19th & 20th Century" on Sunday, January 19 at 3pm. The recital is part of the Molly Blank Jewish Concert Series at the William Breman Jewish Heritage Museum in Atlanta which celebrates the Jewish contribution to music. The concert series is a partnership with the Atlanta Opera.

Garland's recital will include music from the German Romantic composer Felix Mendelssohn, late-Romantic Austrian composer Gustav Mahler, and American composer Leonard Bernstein. Garland will be accompanied by a string quartet made up of members of the Atlanta Opera Orchestra. 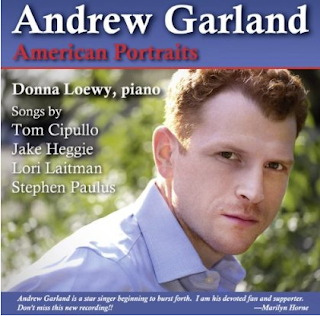 You also may want to check out the review of Andrew Garland's CD "American Portraits" from the National Association of Teachers of Singing (NATS) Journal, which is one of the best reviews we've ever read. You may recall that we named his CD one of our "Barihunks Best of 2013."

Accompanied by Donna Loewy on piano, Garland sings four song cycles, Stephen Paulus' "A Heartland Portrait,"  Tom Cipullo's "America1968" (dedicated to Garland and Loewy), Lori Laitmen's "Men with Small Heads" and Jake Heggie's  and "The Moon is a Mirror." You can order a copy at GPR Records.