Barihunks Zach Altman and Dan Kempson appeared together in our very first Barihunks Charity Calendar sporting their Barihunk tee shirts and creating a sensation with readers. Kempson is known for his stunningly beautiful voice and musicianship, while Altman has forged a reputation as a captivating all-around performer.

Their 2011 wedding made the New York Times wedding announcements and now the duo gets to perform together as a couple. They will be teaming up with two other operatic couples for "Something Sweet..." as part of West Edge Opera's continuously adventurous and innovative programming. The concert will be on Valentine's Day at the Piedmont Center for the Arts (near Oakland and San Francisco). We're thrilled that the company, which used to be known as Berkeley Opera, is using the picture of the couple in their Barihunk tee shirts in promotional materials. 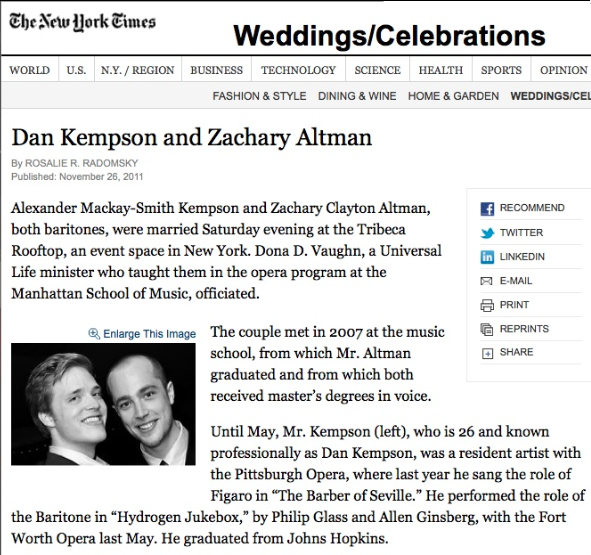 Joining them on Valentine's Day will be soprano Buffy Baggott and tenor Pedro Rodelas, and tenor Adam Flowers and mezzo-soprano Nicole Takesono. We haven't been able to confirm the program for Kempson and Altman except for "Lily's Eyes" from Secret Garden. There is a campy production of the two singing the number on YouTube.

We recently wrote about Dan Kempson sharing the stage with another barihunk, Matthew Morris, in an upcoming production of Puccini's La bohème with the Savannah Symphony. Altman's next stage appearance is as Sharpless in Puccini's Madama Butterfly with Opera San Jose from February 15 - March 2.