Barihunks and Mariusz Kwiecien together in The Telegraph 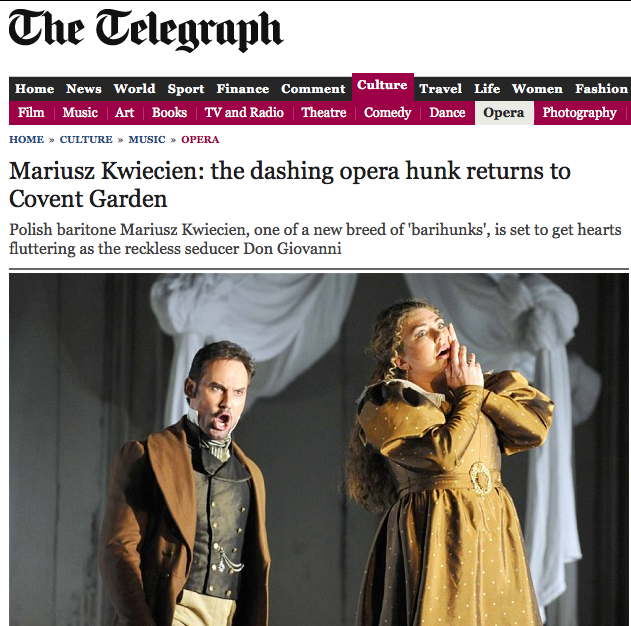 We're big fans of music critic Rupert Christiansen in The Telegraph, so we were thrilled when his profile on über-barihunk Mariusz Kwiecien included a link to our site and a mention in the headline. Christiansen goes on to write:

We love being included in an article on Mariusz Kwiecien, since he was the original inspiration to create the site. Early discussions were actually about creating a Kwiecien fan site, but it seemed too limiting and casting a wider net seemed much more interesting.

Kwiecien has just opened at the Royal Opera House in Kasper Holten's amazing production of Mozart's Don Giovanni, which we recently previewed. The cast also includes barihunks Alex Esposito as his sidekick Leporello and the thrilling Alexander Tsymbalyuk as the Commendatore.

The entire run is sold out through the final performance on February 24th. Don't fret if you missed buying tickets, as the February 12th performance will be broadcast live to cinemas in Europe. and taped for screenings worldwide throughout March. If you're in Europe, check the Royal Opera House website for listings. If you're outside of Europe, check your local movie listings.

Kwiecien will appear next at the Vienna State Opera in Tchaikovsky's Eugene Onegin from March 7-14, before returning to the Metropolitan Opera from April 17-May 10 in Bellini's I Puritani.
at 7:08 AM