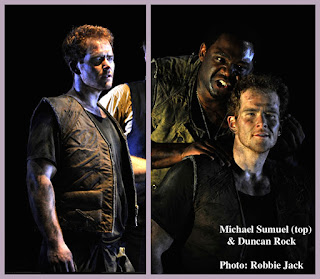 It's amazing to think that was in July 1946 that the Glyndebourne Festival first performed Britten's The Rape of Lucretia. The opera was not particularly well received by audiences or critics at the time, but the chamber opera has grown in popularity in recent years, with Glyndebourne bringing it back just two years after they performed it for the Benjamin Britten centenary.

With England all in a twist about a rape scene and some nudity at the Royal Opera House's production of Rossini's William Tell, it's probably good that they brought back director Fiona Shaw’s  non-sensational, straightforward production. Of course, we love the opera for it's trio of low voices and Glyndebourne has brought in three of the best. Barihunk Duncan Rock is back as Tarquinius with Matthew Rose as Collatinus and Michael Sumuel as Junius. Richard Fairman in the Financial Times described Duncan Rock's Tarquinius as "Schwarzenegger-like."