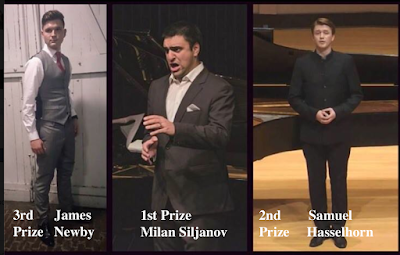 Samuel Hasselhorn took 2nd Prize and won £5,000. His program included Duparc, Schubert and Reimann.  22-year-old James Newby took 3rd Prize, as well as the Richard Tauber Prize given for the best interpretation of Schubert. His program included Finzi's Let us garlands bring and Schubert's An Sylvia?

Baritones have historically fared well at the competition, with Gavan Ring taking 2nd Prize in 2013 and Dominik Köninger winning the top prize in 2011. The competition is held in odd numbered years.