The Teatro Massimo di Palermo will be alternating casts in Puccini's La bohème, which opens on September 18th. The cast performing on September 19, 22, 25 and 27 will feature the Italian barihunk trio of Simone Alberghini as Marcello, Dario Russo as Colline and Italo Proferisce as Schaunard. Additional information is available online.

We introduced Simone Alberghini when he appeared as Don Giovanni in a production with and "18 and older" warning at the Perm Opera. The other singers are new to this site.

Dario Russo graduated with a degree in Foreign Languages ​​and Literatures, focusing on Russian and German. After finishing his studies, he became a member of the Opera Studio Nederland of Amsterdam and was part of the Opera Workshop as the Teatro Carlo Felice in Genova. Recent performances have included Enrico in Anna Bolena in Catania, Count Walter in Luisa Miller at the Teatro di San Carlo.Demetrio in Rossini's Demetrio e Polibio at the Teatro San Carlo of Naples, the Commendatore in Don Giovanni at Opera Basel, Raimondo in Lucia di Lammermoor at the Teatro San Carlo of Napoli and Colline in Trieste. He next sings in Bari where he'll perform Colline with the Marcello of fellow barihunk Giorgio Caoduro. 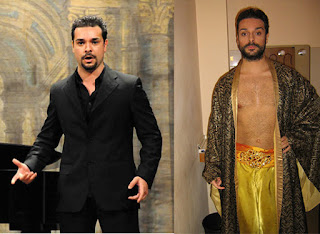 Naples native Italo Proferisce studied piano and voice at the Conservatorio G. Martucci in Salermo and attended  the Accademia di Alta  Formazione del Teatro  del Maggio Musicale Fiorentino. He was a finalist or winner in numerous vocal competitions between 2009-2011. He made his debut as Don Perizonio in Cimarosa's L'impresario in angustie in Budrio in 2011. He  performed as Figaro  in  Le nozze di Figaro and as the father in Fortunato's Falcone e Borsellino at the Teatro Verdi di Pisa, Marcello in La Bohème with Teatro Ammitato in Florence and Deputato Flamingo in Don Carlos  with Maggio Musicale Fiorentino.
at 6:33 AM