Other engagements for baritone Luis Alejandro Orozco this season include the title role in Mozart's Don Giovanni at Bar Harbor Music Festival, Figaro in Rossini's Il barbiere di Siviglia in his house début with Florentine Opera in May 2017, and a reprisal of his signature role, El Payador, in María de Buenos Aires with the Atlanta Opera.

Bass-barihunk Brent Smith is featured in the month of April in our "2017 Barihunks in Bed" calendar which is on sale now. As a Young Artist at the Michigan Opera, he has sung Colline in Puccini's La bohème, the Second S.S. Officer in Weinberg's The Passenger, the Doctor in Verdi's Macbeth and The Speaker in Mozart's The Magic Flute.

Last year he was an Apprentice Artist with Des Moines Metro Opera, where his performance as Billy Jackrabbit in Puccini's La fanciulla del West received critical acclaim by Opera News as a “standout.”

Baritone Harry Greenleaf was a Studio Aritist with the Wolf Trap Opera Company in 2012 and 2013, where he sang the role of Baron Douphol in Verdi's La traviata and Monsieur Barbu in Poulenc's Les mamelles de Tirésias. He made his debut with Michigan Opera Theatre in 2016, singing the role of Top in Copland's The Tender Land, as well as Jake Wallace in La fanciulla del West, and Le Bret in Dr. David DiChiera’s Cyrano. 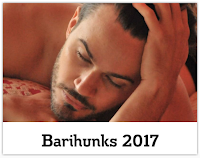