Bass-barihunk André Courville will perform as part of Opera at Florham's "A Cornucopia of Opera and Song" on November 6th at Lenfell Hall on the campus of the College at Florham of Fairleigh Dickinson University.

Courville will perform Gounod's “Vous, qui faites l'endormie” from Faust. He performed the role of Méphistophélès in Faust while at the cademy of Vocal Arts in Philadelphia, where he is a resident artist. He'll be joined by soprano Mia Pafumi and tenor Piotr Buszewski.

He'll also be performing at the Licia Albanese-Puccini Foundation 42nd Anniversary Gala Concert on October 23 at Rose Hall at Lincoln Center and will reprise Monterone with the Academy of Vocal Arts from November 5-15.

Don't forget to order you 2017 Barihunks in Bed calendar. Our 10th anniversary edition is the HOTTEST ever. Click HERE to order your copy now and enjoy 12 months of the hottest men in opera. 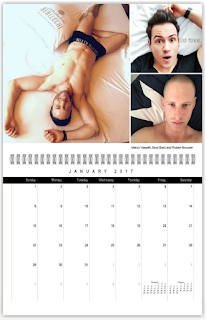