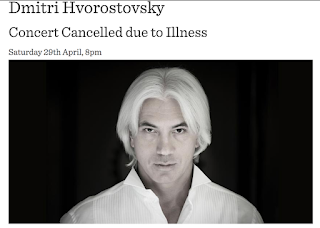 The following notice appeared on the website of the National Concert Hall where barihunk Dmitri Hvorostovsky was scheduled to perform on April 29th.

Dmitri Hvorostovsky deeply regrets that he must cancel his recital due to a change in the schedule for his cancer treatments.

Information about the concert has been removed from the Hvorostovsky’s official website, but his manager says that the Russian singer still plans on performing in a gala concert in Toronto on April 25th along with soprano Anna Netrebko and her husband tenor Yusif Eyvazov.

Hvorostovsky was diagnosed with a brain tumor in the summer of 2015 and subsequently cancelled concerts in Kaliningrad, Minsk and Vienna, as well as performances in the Met's current production of Tchaikovsky's Eugene Onegin. He was replaced by fellow barihunks Peter Mattei and Mariusz Kwiecien.
at 6:26 PM