Barihunk Malte Roesner will make his North American debut in Soler's The Chastity Tree with West Edge Opera from August 6-19.

Despite being born in New York City, Roesner was raised in Germany and has focused his career in Europe. During his decade as a fest singer at the Staatstheater Braunschweig he portrayed more than fifty roles in the baritone repertory. He took some time off to retrain as a basso cantante and auditioned in the United States last year, eventually landing one of the few principle roles for a bass, Doristo in The Chastity Tree. (We've been told that two other U.S. announcements are forthcoming).

The two-time winner of the Richard-Wagner-Foundation scholarship will be joined by an all-star cast led by sopranos Christine Brandes as Cupid and Nikki Einfeld as Diana. The gifted accompanist Robert Mollicone will conduct. 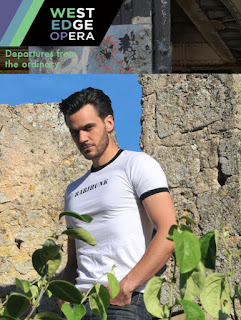 This is Spanish composer Vicente Martín y Soler's most famous work and is also known by its original title L'arbore di Diana. In the last decade, the opera has been performed in Valencia, Barcelona, Madrid, Montpelier (France) and Minneapolis. Barihunks Marco Vinco and Giorgio Caoduro have both sung the role of Doristo.

The work was enthusiastically received with 70 performances in the three years after its premiere.