A birthday tribute to Mariusz Kwiecien

Few singers are more popular on this site than Polish barihunk Mariusz Kwiecien. He was also one of the early inspirations for creating this site along with Dmitri Hvorostovsky. He's developed a cult following with opera fans around the world and today we're celebrating his 45th birthday. Like Simon Keenlyside, Rod Gilfry and Thomas Hampson, he seems to get better with every passing year. As regular readers of this site know, we've dubbed him "The Hot Pole."

Kwiecien was born in Kraków, Poland in 1972, but has a long history with New York, beginning with his participation in the Lindemann Young Artist Development Program and then becoming one of the biggest box office draws at the Metropolitan Opera. He made his debut with the company in 1999 as Kuligin in Janáček's Káťa Kabanová. During the 2011/12  Met season, he amazed everyone with his resilience when he returned to take on the demanding title role of  Don Giovanni after injuring his back in rehearsals. The performance was also broadcast live in HD worldwide.

He is next slated to appear as Zurga in Bizet's Les pêcheurs de perles (The Pearl Fishers) at the Lyric Opera of Chicago from November 19-December 10. He returns to The Met on December 29th for a run as Count Almaviva in Mozart's Le nozze di Figaro opposite Ildar Abdrazakov in the title role.


Kwiecien is probably best known for his sensuous and sexually charged portrayal of Don Giovanni. In this golden age of baritones, he's considered one of the two or three best exponents of the role. He is slated to sing Don Giovanni as the Dallas Opera from April 13-29, 2018 and then at the Royal Opera House in London from June 30-July 17, 2018

Many of his performances have been preserved on DVD including his stunning Eugene Onegin from the Bolshoi Opera and Met broadcasts of Donizetti's L’elisir d’amore and Lucia di Lammermoor. His recording of “Slavic Heroes” is arguably one of the best recordings of Eastern European arias on CD. 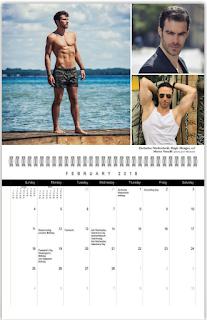 Our 2018 Barihunks Calendar, which includes 20 of opera's sexiest men is now available for purchase HERE. In response to reader demand, we've also added a Barihunks Photo Book this year, which includes additional photos that don't appear in the calendar. You can purchase that HERE. The New Year is approaching faster than you think!
at 12:00 PM