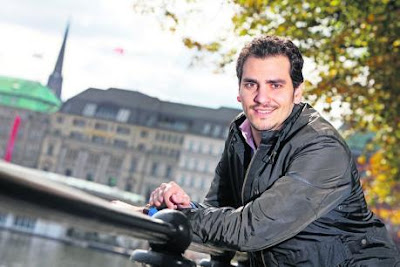 [Photo from the Hamburger Abendblatt]

Bass-Barihunk Wilhelm Schwinghammer was recently featured in the Hamburger Abendblatt. The first line of the article roughly translates, "With his thick black hair and dark eyes under thick brows, he could easily be mistaken for a Latin Lover." The article goes on to explain that the singer is actually Bavarian. He's also been featured on this site before in a post called "Hamburger Hunks." The hunky German studied at the Musikgymnasium der Regensburger Domspatzen before heading to the University of the Arts in Berlin. He has refined his craft in smaller roles at the Hamburg Staastsoper.

Schwinghammer recently gave a riveting performance of Beethoven's 9th Symphony with the Singapore Symphony Orchestra. You can briefly hear him in this YouTube clip from Johann Gottlieb Naumann's "Aci e Galatea." Word out of Germany is that he is an extremely gifted Handel performer.

Just for laughs, Barihunks placed "Schwinghammer" in the Google Translator and it came out "Vibrating Hammer." With a name like that he might be mistaken for more than a Latin Lover.