We had some amazing highlights in 2010 and we want to share the “Top 10” with you. We are both amazed and pleased at the popularity of this site. Our network of fans and “scouts” across the globe has kept this site interesting and informative. Compiling this list was tougher than we imagined, but here it it:
HOTTEST BARIHUNK:

This was a no-brainer. Pictures of Gabriel Bermudez in Poulenc’s “Les mamelles de Tiresias” drove traffic to the site in numbers that we had never seen and his post has remained the most popular each and every day since it debuted. We’ve learned that readers like to be titillated with a little skin and Bermudez delivered.

We don’t want to say that we were surprised that a picture of  Zach Altman was incredibly popular, because he’s incredibly sexy. But we were taken aback at the staying power of the post, which continues to generate traffic to this day. We have to give and honorable mention to Jason Hardy, who appeared shirtless in New York City Opera’s Don Giovanni. We received an email from a soprano titled “Jason Hardy” and the body of the email read, “Who knew!!!”

Somehow Europe managed to keep this American singer away from his native country. But in 2010 Randal Turner made his stage debut as a searingly hot Don Giovanni in Detroit and then followed it up with a recital in San Francisco highlighting American composers. He looked as hot singing Jake Heggie songs as he did singing Don Giovanni and chasing around the women of Spain, Italy, France…

Blogging has become the realm of barihunks and Michael Rice’s OperaNow! and Michael Mayes’ “Texapolitan Opera” are the two hottest shows on the planet. And the two singers ain’t too bad either! An appearance by barihunk David Adam Moore on the Texapolitan Opera broadcast may have given us the best new term for 2011: The Full Okulitch. The term refers to a singer who appears in full frontal nudity on stage, which Daniel Okulitch did in the Los Angeles Opera’s “The Fly” a year before Gabriel Bermudez.

No one consistently gets fan mail and hits to the site like Nathan Gunn. He is popular across demographic groups, age groups and geographic borders. He is as sexy in his 40s as he was at the beginning of the career and the Wall Street Journal even wrote about his workout regime. Who else appeared in the New York Post because he made a woman faint?

Former football player Keith Miller has captured the attention of the media with his exotic good looks and is poised to become the next Nathan Gunn. Runner up status has to go to Erwin Schrott and Paulo Szot, both of whom generate press anywhere that they go. Miller broke through the media clutter in 2010, which Szot and Schrott managed to do before 2010.

Like Randal Turner, the European opera community has kept Edwin Crossley-Mercer to themselves. His recitals are worth an operatic pilgrimage. When we received emails about his recitals in English, French, German and Spanish, we knew that we had to check him out.

This site was founded because two of us saw Mariusz Kwiecien in separate performances and were going to create a fan site. Instead we decided to seek out other hot baritones after reading about other barihunks on the  Parterre Box website. Of course, the Polish singer has the best nickname, as well: The Hot Pole.

We love Chris Herbert because he’s smart, sexy, talented and gives back to the community. Herbert has devoted much of his time to "Sing for Hope," following in the path of mega-star Erwin Schrott, who regularly gives benefit concerts. He is currently on tour with New York Polyphony.

When we ask people in the opera world who is destined for stardom, the name of Matt Worth consistently comes up. We think that this hot young American will be the breakthrough star of 2011. 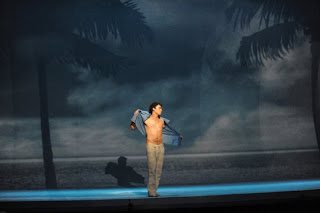 We should also mention Wes Mason, who had a breakthrough performance in "Before Night Falls" at the Ft. Worth Opera and proved that he has a place on the international opera stages of the world.