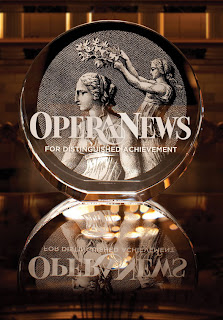 Two barihunks are among the honorees for the seventh annual Opera News Awards, which will be presented on Sunday, April 29 at The Plaza in New York City. The awards, pay tribute to artists who have made an invaluable contribution to the art form. Dmitri Hvorostovsky and Peter Mattei will join sopranos Karita Mattila and Anja Silja, as well as director Peter Sellars as honorees.

The official announcement will appear in the September 2011 issue of Opera News, which is available on August 4 and features barihunk Mariusz Kwiecien on the cover. [We will post the cover tomorrow].

The Opera News Awards were created in 2005. They recognize five individuals each year for distinguished achievement in the field of opera.

Here is Peter Mattei with Juan Diego Florez singing the Act 2 duet from The Barber of Seville:

Here is what Opera News wrote about Mattei and Hvorostovsky in announcing the awards.

"Peter Mattei's lustrous baritone - firm and generously produced, with an appealing softness around the edges - sets him apart today as a marvelous singer. But it's his astonishing ability to inhabit a range of characters - from the frothiest comedy to the bleakest tragedy - that makes him an artist of the highest caliber."

"Dmitri Hvorostovsky's charisma, glamour, and vocal prowess are without peer. Equally persuasive on recordings, on the recital stage, and in the opera house, Hvorostovsky is a singer whose artistry speaks to everyone."