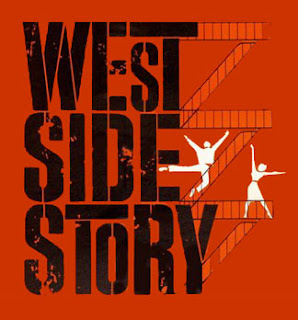 Fifty-four year ago today one of the greatest moments in theater history occurred as West Side Story premiered at the National Theater in Washington D.C. After successful previews in D.C. and Philadelphia, the original Broadway production opened at the Winter Garden Theater on September 26, 1957 making a permanent mark on American theater.

West Side Story was composed by Leonard Bernstein with a script by Arthur Laurents and lyrics by Stephen Sondheim. The musical is a modern adaptation of William Shakespeare's play Romeo and Juliet.

The original production was directed and choreographed by Jerome Robbins, produced by Robert E. Griffith and Harold Prince and starred Larry Kert as Tony, Carol Lawrence as Maria, Chita Rivera as Anita and David Winters as Baby John the youngest of the gang members. Robbins won the Tony Award for Best Choreographer, and Oliver Smith won the Tony for Best Scenic Designer. Also nominated were Carol Lawrence, as Best Actress in a Supporting Role in a Musical, Max Goberman as Best Musical Director, and Irene Sharaff for Best Costume Design. Carol Lawrence received the 1958 Theatre World Award. The production ran for 732 performances at the Winter Garden Theatre before touring and then returning to the Winter Garden Theatre in 1960 for another 253 performance engagement.

And just for fun, here is the charming, attractive and talented John Barrowman singing Maria:

And since we've strayed away from baritones, here is a rare clip from a 1964 broadcast of the "Anna Moffo Show":