Michael Todd Simpson brought his swaggering Escamillo to Seattle Opera for their performances of Bizet's "Carmen." In a performance that included the riveting Carmen of Anita Rachvelishvili and a host of other hot men, the American barihunk managed to catch the attention of reviewer Jackson Holtz at the Everett Herald.


"Seattle Opera veteran Michael Todd Simpson was sexy and charming as the matador."

You can read the entire review at the Everett HeraldNet website.


"Don José...projected just the nebbish air of indecision that makes José putty in Carmen's hands — no competition for the sexy Escamillo and Zuniga of Michael Todd Simpson and Donovan Singletary." 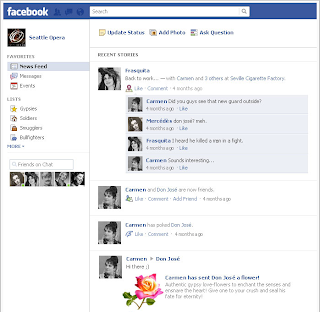 By the way, if you haven't seen the Seattle Opera's "If Carmen and her friends were on Facebook...," then you missed one of the funniest and creative things that we've ever seen from an Opera Company (that was meant to be funny!). You can see the entire post on their wonderful blog.

Kudos to the Seattle Opera, which continues to be one of the most creative opera companies in the world.

You can read the entire review at the Detroit Free Press website.

Jérôme Varnier is wrapping up a run as Palémon in Massenet's "Thaïs" tonight at the Opéra de Tours. He now heads to the Opéra-Théâtre de Metz to perform Guido in Ambroise Thomas' "Francesca da Rimini," which opens on November 18. Tickets and additional performance information are available online.
at 6:28 AM