If you're anywhere near the Statue of Liberty, Big Ben, Parliament Hill or the "Land of 10,000 Lakes," then there are recitals near you that you won't want to miss.
We first learned about Gabriel Preisser about a year ago when we received an email from a respected figure in opera who touted him as the next great baritone voice. At the time, Preisser was performing small roles at the Kentucky Opera and heading off to the Pensacola Opera. He has since wowed the judges at the Lirico Concorso Competition and landed at the Minnesota Opera (with what seems like a planeload of barihunks. More on that in a future post). Preisser can be seen Thursday night as part of the Schubert Club's "The Magic of Mozart" series. He will be performing with soprano Angela Mortellaro and accompanist Aaron Breid. Click HERE for additional information.
Another singer who has been wowing judges in Michael Kelly, who recently showed off his vocal skills at the Wigmore Hall/Kohn Foundation International Song Competition and was the winner of the 2011 "Joy in Singing Award." We also recently featured an entire recital from Michael Kelly on this site, which you can still watch.

If you'd like to see him live, he will be part of the New York Debut Artist Recital series on Monday, October 24th at 8pm in Merkin Hall. Visit their website for additional information. His recital will feature music by Schubert, Poulenc, Vaughan Williams, and William Bolcom, and introduce a new cycle written for him by Ben Moore. Jonathan Ware will be at the piano.

On Thursday, November 3rd, Kelly will appear at the Hungarian Consulate General with soprano Julia Küsswetter to perform music by Beethoven, Mozart, Schubert, Liszt and Bartok. Additional information can be found at the German Forum website.

On Saturday, October 15 at 7:30 pm  Jonathan Estabrooks and his brother Bryan Estabrooks will present a musical journey ranging from opera houses to night clubs. Hosted by Jian Ghomeshi from CBC Radio's Q, this promises to be an entertaining evening. Trust us that anything involving the Estatbrooks Brothers promises to be fun. The performance is at the Shenkman Arts Center in Ottawa. Click HERE for additional information.

Of course, you can always catch Jonathan Estabrooks at "A Singer's Life" on YouTube. 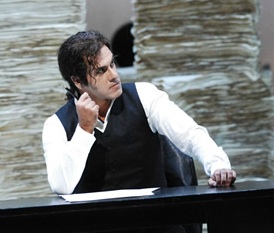 For those of you in London, the great Italian baritone Lucio Gallo is the next performer in the Rosenblatt Recital series on Wednesday, October 12 at 7:30 PM. He'll be bringing sunny Italy to England with an evening of songs and arias by Tosti. Visit the Rosenblatt Recital website for additional information.