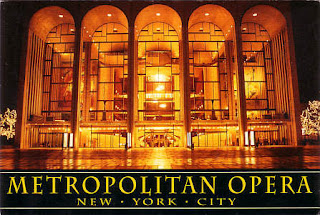 We weren't going to post about the new Metropolitan Opera season, because we figured everyone has already written about it. We received a couple of emails asking us why we hadn't posted about it, but we still thought that there were better stories. Then we got this email, "I don't want to read about the Met season in the Times, which always leads with the predictable '[fill in soprano name] to open new Met season.' Why aren't you guys letting us know which barihunks are being cast? I've discovered Kyle Ketelsen because of your site and jumped online to buy tickets for his Leporello."

How can we resist that plea?


Mariusz Kwiecien does a little strip tease in Elisir:

On September 24, Mariusz Kwiecien will open the season in Donizetti's "L'Elisir d'Amore" opposite Anna Netrebko. The performance will be broadcast live in HD on October 13.


Simon Keenleyside (Prospero) and Christopher Lemmings (Caliban) in a scene from Act 1 of 'The Tempest' recorded at Royal Opera House, Covent Garden:

Undoubtedly, one of the hot tickets will be Simon Keenlyside portraying Prospero in Thomas Adès' "The Tempest." By the way, the entire cast is a bit of eye candy, with Audrey Luna (who is married to barihunk Jordan Shanahan) as Ariel, Isabel Leonard (who is married to barihunk Teddy Tahu Rhodes) and tenor hunks Alek Shrader, William Burden and Toby Spence. The opera will be broadcast in HD on November 10.

The ageless and man on seamless legato, Dmitri Hvorostovsky, will open Verdi's "Un Ballo in Maschera" on November 8 as Anckarström opposite Karita Mattila. The opera will be broadcast in HD on December  8.

Wagner gets into the barihunk act, as well, when Parsifal opens on February 15, 2013 with the amazing René Pape as Gurnemanz and Peter Mattei as Amfortas. The Live in HD broadcast will be on March 2, 2013.


On April 4, 2013, the Met goes baroque with Handel's "Giulio Cesare" with Guido Loconsolo as Achilla and countertenor David Daniels in the title role. The Live in HD broadcast will be on April 27, 2013.