We make no secret about Michael Mayes being one of our favorite people in opera. His Texapolitan Opera Roadshow podcast remains one of the most interesting and entertaining shows about classical music and opera anywhere. He's also a great guy, has an amazing stage presence and he's a wonderful singer. What's not to like? We're pretty sure that his performance as Joseph de Rocher in Jake Heggie's "Dead Man Walking" at Tulsa Opera is going to put him on the international opera map. Mayes was made for this role and took it so seriously that he dropped 50 pounds and hit the weights. As he puts it, he went from "barichunk to barihunk."

Here's an interview from his ADA artists website where he talks about the role.

How does one prepare to play a character that is convicted of murder?

Joseph de Rocher is a composite character, meant to embody the spirit of the men that Sister Helen Prejean accompanied on their final walk. For an actor with my background, this is a perfect situation.  While I didn’t grow up a desperately impoverished white boy from Louisiana from a shattered home; I did grow up among some of the poorest people in our country~ what many people today would callously call ‘trailer trash’, an epithet of which I’ve often been on the receiving end.  In my hometown, Cut n Shoot, TX, I played football, went to school, family reunions, church, and got into trouble with countless Joseph de Rochers.  The archetypal scared white boy that grows into am angry white man is a story that sadly, I am more familiar with than I would like to be~ and the experience of living with these kinds of personalities has been key in developing my interpretation of Joseph. I had to do all the things you would expect one to do:  research prison life, pour through Helen’s books, countless seminars and lectures, watch as many documentaries as I could about men on death row so that I could try and grasp the physical and mental gauntlet that these men go through on the way to their demise, etc.  These are all the basics, and nothing surprising to anyone who really stops and thinks about the enormous amount of work and research that goes into a role like this~ but the essence of Joe, the distillation of his nature, the way he walks, talks, reacts to stimuli, what he feels deeply, his fears, his desires; these things came surprisingly easy to me.

It was surprising.  It was as if there was some place, deep in the recesses of my own consciousness that understood this man in ways with which I wasn’t comfortable when I first began.  It actually took me a while to begin the deeper work once I’d been offered the role.  I was unmanned by some of the feelings that would bubble up while I was in deep thought about him.  I would start, and then just leave the project all together~ preferring instead to plumb the ‘depths’ of Escamillo or Papageno’s psychological profile. (people that know opera know how ridiculous that is).  But as February began to loom on the horizon, I began to feel this presence.  My subconscious was doing the work for me, whether I liked it or not, and as I began to meld my work with Heggie’s music, McNally’s words, and Prejean’s material, Joseph began to emerge almost fully formed.  Even as I type this, I find myself unable to effectively articulate what it’s like to be him. It’s not something I feel like I’ve had to go out and find, rather its something deep down inside me, like the pieces of a horrifying weapon that, fortunately, I’ve never assembled.  When this thought occurred to me, I realized that but for a few lucky breaks in life, it very well could have been me in that roadhouse, taking the wrong kind of drugs, indulging the worse kind of vices, allowing the darkness in me to completely obliterate any humanity I had left.  I’ve been that angry.  I know what it feels like to walk right up to the edge of the abyss and look into nothingness and oblivion.  Luckily it usually terrified me so much that I would immediately run from whatever was pushing me in that direction, but just before I turned~ there was always this seductive pull, that made something inside of me want to jump, leap into the darkness and let it completely envelop me.

When I heard actors talk about wrestling with a character, I honestly always thought it was pretentious bullshit, but Joseph taught me my lesson about hubris, and continues to do so everyday.  Developing this character has really felt like developing a form of schizophrenia.  I don’t feel this way with every character I work on, some of the more complex characters have given me a taste of what its like, but never have I felt so inhabited.  With Joseph, when I’m in the cut, and things are lining up, when I feel that groove~ I feel him…come upon me.  Its truly unsettling.  When the accent is just right, when I’m hitting all of the emotional targets, suddenly, I’m gone and he’s there.  All the anger, the hatred, the fear and bitterness, the rage and terror~ these things I normally have to show when I’m acting~ but with Joseph, its only necessary to be.  Wrestling? Yeah, that’s a good word for it.  I often feel like I have to fight to regain myself after rehearsals, and when I’m done, the residue clings to me like the remnants of a dust storm late into the evening.  I am usually just about back to normal when its time to let him back in for the next rehearsal.  This sounds all very heavy, but its not a unusual phenomenon in other theatrical arts.

One of the more practical aspects of playing Joseph has been the physical transformation that I’ve had to undergo.  Joseph works off his anger and frustration in a scene at the top of Act II by doing push-ups during his one hour of exercise a day.  This definitely changes the way you have to appear onstage~ so as Tulsa began to creep closer in my date book, I began a physical transformation into Joseph that was one of the most challenging I’ve ever encountered.  In order to really get Joseph right, I had to go from Bari-chunk to Barihunk, something that has not gone unnoticed by the popular opera blog that is behind the genesis of that term. (BARIHUNKS)

I dropped 50 lbs, and started hitting the gym muscling up as much as I could and still be able to sing, and I traded in my long wavy auburn locks (a real source of vanity for me) for a skin close high and tight and a style of facial hair popular among white supremacists.  The physical transformation has had as much to do with this feeling of being inhabited by Joseph as the emotional and psychological.  With these physical attributes, I am immediately viewed by strangers as an anti-social individual~ and the looks of disdain, pity, anger, fear that I get just walking around in the world is a marvelous insight into the kinds of daily input that Joseph got from the world around him.

Preparing to play a rapist/murder is not for the faint of heart.  It’s taken it’s toll, just ask my fiance.  Joseph has wreaked havoc in my personal life, there is no denying it. He’s not one of these characters  you can put on at 7:30 and be ready by 8 for the performance.  You can’t put him away until after the last curtain goes down, and even then, I’m not sure I’ll be shut of him.  Despite the turmoil and tribulation that one has to endure when preparing for and performing one of these characters, at the end of the day its one of the most satisfying experiences an actor/singer can have on the stage, and for the first time in my career I can say that I am fully and without reservation doing that which drew me into this business in the first place. 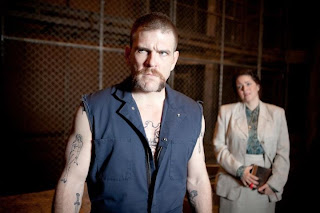 What themes, ideas, or concepts do you wish the Tulsa audience will take with them to contemplate and discuss after the performance?

This opera does not take a position on the death penalty.  You may get insight into Joseph’s mind, you may understand  the how and why of what he did, but the way the opera is crafted~ you never forget the absolute horror of his crimes, the absolute destruction that his actions have wreaked on the the lives of the families of his victims and of his own family.  Anytime you’re taking on a hot-button issue, the temptation is there to ram your own passionate political belief down the throats of those on the other side.  This temptation is not only resisted, but actively denied by the people behind this piece.  When you get beyond the political theatre, you realize that this opera is not about the death penalty. The death penalty, death row, prison, rape, murder, these things are all incredibly effective settings and plot devices;  but once you boil this piece down to its essence, its truly about forgiveness, grace, and shades of gray.  No matter what your position on the capital punishment, you will not be able to leave the theater without questioning your own stance… and that’s the point of Dead Man Walking, not the statement, but the question.