Our latest reader submission is the Finnish baritone Tom Krause, who was a leading baritones for four decades across the globe. He originally planned on becoming a psychiatrist, and received his medical degree from Helsinki University. However, he opted for a career in opera, beginning his studies in Helsinki, and later at the Vienna Music Academy and in Berlin. 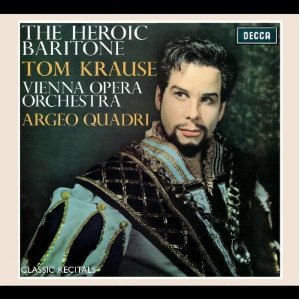 Since his debut in Berlin in 1957, Tom Krause has established himself as a leading baritone with a vast repertoire, ranging from Bach to Messiaen. He was with the Deutsche Oper Berlin for three years and was a member of the Hamburg State Opera for decades beginning in 1962, where he performed in a number of world premieres. He went on to perform in most of the major houses in Europe, including La Scala, Vienna, London, Berlin, Munich, Copenhagen, Brussels, Amsterdam and Rome. He performed leading roles in The Marriage of Figaro, Les Contes d'Hoffmann, La Concrentola, Parisfal, Elektra, Cosi fan Tutte, The Queen of Spades, Katya Kabanova, and Saint Francois d’Assise.

In 1963, he made his American debut in America at Tanglewood with the Boston Symphony Orchestra. He made his Metropolitan Opera debut in 1967 as Count Almaviva.


Tom Krause appears on numerous recordings of both opera and lieder, including works by Brahms, Schumann, Moussorgksy, Schubert and Sibelius).

He is currently teaching in Hamburg and is member of numerous Voice Competitions through the world.
at 9:10 AM