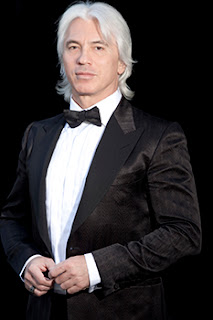 Dmitri Hvorostovksy and soprano Sondra Radvanovsky, who are appearing together in the Met's "Un ballo in maschera" will be signing copies of their CDs at the Met Opera Shop this Wednesday, November 28th at 3pm. Explore Hvorostovsky's discography HERE.

There are still five performances of the David Alden production of Un ballo in maschera remaining before December 14th and tickets are available online.

Don't forget that the Siberian Hunky will also be part of the Live from Lincoln Center: 2012 Richard Tucker Gala broadcast on Thursday, December 13, 2012. Make sure to check local listings to see when it's airing on your local PBS station.

Established in 1975 by the family of the beloved tenor a few months after his untimely death, the Foundation offers, by way of a Competition, financial support to young opera singers on the brink of important careers.

Of course, we at Barihunks have our own very special and enjoyable way to support young artist, which is our charity calendar. It's packed with 14 of the hottest barihunks in opera, so order yours today. Give the give of music education to our next generation of singers today!